Is Liu Wen the Face of the New Apple Watch?

Posted on: October 3, 2014
By: Fashion One
Featured Video
When the Apple Watch had its debut during Paris Fashion Week, many of the biggest names in fashion gathered at the designer concept store Colette on the Rue Saint Honoré – including Anna Wintour and Karl Lagerfeld. Chinese supermodel Liu Wen was on the guest list as well and immediately sparked rumors that she might be the face of the highly anticipated product .

Earlier this week, Wen shared a picture on Instagram, which shows the 26-year-old model trying on the new gadget. Her comment below the picture reads "My second meeting with the Apple Watch, this time in Colette! The first time? Well, you’ll see soon."

Previous campaigns for Apple products often featured stars like U2, Will.I.Am and other music business-related celebrities. Now the company launches its first actually wearable product and it is obvious that Apple wants to market its latest technical marvel as a stylish accessory, which should appeal to fashion enthusiasts as well. With that objective in mind, it would not come as a surprise if the tech giant enlisted a catwalk goddess like Liu Wen for their upcoming campaign.

Wen is one of today's most successful models and was the first Asian ever to make it to the Forbes magazine's list of highest-paid models. During the past season, she rocked the runway for numerous top tier labels like Givenchy, Chanel, and Balmain. 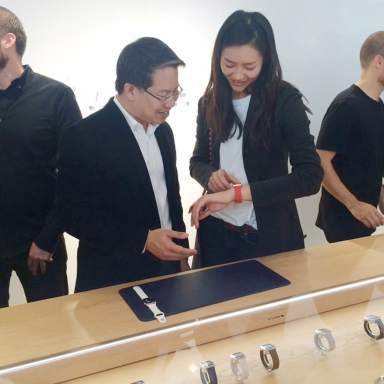