One more year we’re very excited to announce that the modeling contest Fresh Faces Poland who was organized by Magteam Model Management has almost come to an end! During the Semi-Finals the Jury selected the best male & female models who will get a spot in the Polish Finals!

Aleksandra Przybyła, Fresh Faces Poland winner from the previous edition was seen on the covers of prestigious magazines and at the runways of the biggest fashion shows! 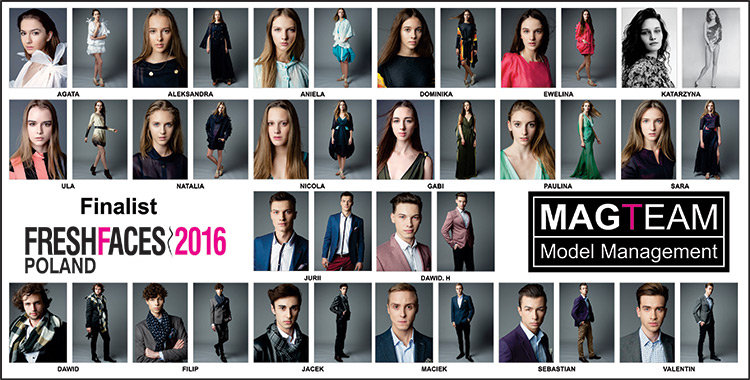 This year’s winners will go on a trip to NYC and visit the largest modeing agencies. A great opportunity for their modeling career! Winner will be future on cover of HOT Moda Magazine in Poland. Other finalist will also get a professional photo shoots and other prizes which are donated by sponsors and partners of the Fresh Faces Poland 2016 contest!

This is a description about semi finals, please print whatever you like

November 5, 2016 in the Studio U-22, Warsaw, took place the semi-final elimination for the model search Fresh Faces Poland 2016, organized by the agency Magteam Model Management Poland/ NYC. The jury, which comprised, among others, Viola Śpiechowicz, Ewa Wojciechowska and Federico Superima (agencies from Milan and NYC), under the leadership of Maggie Haese - CEO and owner Magteam Model Management and Fresh Faces Poland, chose 12 finalists and 8 finalists and 4 reserves, who will present during the final gala Fresh Faces 2016, scheduled for November 29 this year in Villa Foksal in Warsaw. Semifinals were led by Maggie Haese .At the end of the event, semi-finalists participated in classes Tai-chi created by world champion Ewa Mechelewska and photo session by Igor Drozdowski, with a collection by Viola Śpiechowicz and company Pakolorente. Fresh Faces is an international competition dedicated to young people who want to work in modeling. es. The winners of the previous editions, can be seen on the covers of prestigious magazines and the world's catwalks. The main prize Fresh Faces Poland 2016 is trip to NYC for the largest . Finals Fresh Faces Poland 2016 will take place on 29th November, 2016 in Villa Foksal, Warsaw at 7:00pm

Aleksandra Przybla is the New Winner of Fresh Faces Poland 2015

And the Winner of Fresh Faces Poland Is…
Do you have a Fashion story idea or tip? Email us at submissions@fashionone.com.