Emma Stone Flashes Her Smile and Her Underwear at the Oscars

Posted on: February 25, 2015
By: Stephanie Park
Featured Video
The 87th annual Academy Awards was an eventful night. Lady Gaga wowed the crowd with her spectacular rendition of The Sound of Music and The Grand Budapest Hotel took home some unexpected Oscars. The evening was also an evening full of wardrobe malfunctions, like John Travolta’s weird man collar and Behati Prinsloo’s accidental nip slip. The best wardrobe malfunction of the evening, however, happened right on the red carpet.

Emma Stone, who was nominated for Actress in a Supporting Role, landed on just about everyone’s best dressed list for her chartreuse Elie Saab gown. The actress looked like a vision in the long-sleeved, beaded gown while the canary color perfectly complimented her complexion and hair. The dress had a sexy, thigh-high slit in the front which later proved to be the cause of her wardrobe malfunction. 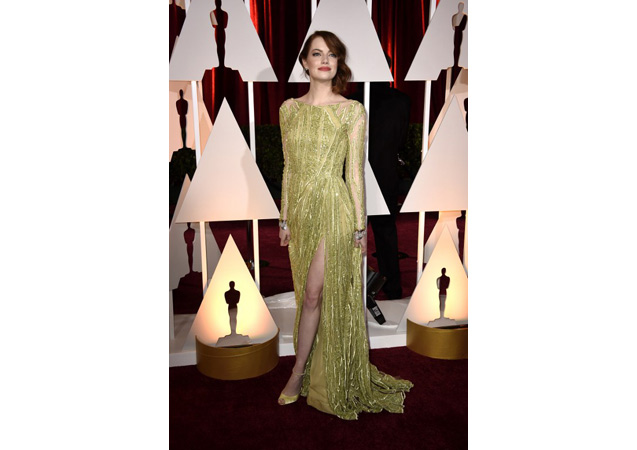 Emma Stone and the slit that didn’t stop.


The star was being photographed as she was raising her train when the slit went a little too high and flashed her nude underwear. Needless to say, reporters had a field day and the image has since gone viral. Despite the barrage of paparazzi flashing their cameras at her nether regions, the actress remained calm and continued smiling for photographers.

Hot or Not: 10 Standout Looks from the MTV Movie Awards
Do you have a Fashion story idea or tip? Email us at submissions@fashionone.com.